Debs and Errol are a creative team behind some really clever and well done music that lives on the geeky edge as well as a fun web-comic. Full disclosure before I get into the details of their music: I did receive free access to their music to review. 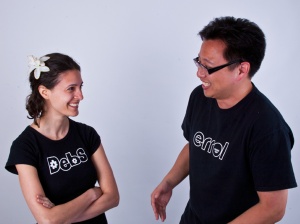 Debs and Errol’s songs appeal to the inner geek in all of us. We’ve all seen Youtubes that are clever and quirky, they’re great simply because of the content, not so much the singing.  While these songs are geeky, funny (and often brilliantly funny), they are talented musicians. They sound really good. So this takes clever to a different level. A song that portrays this well is Falling Quickly, based, of course, on Glen Hansard’s Falling Slowly. It is an ode to Tetris junkies which, alas, I have to include myself from time to time. Not that I ever relate to these lyrics:

Falls too quickly, I feel sickly
And I can’t go back
I can’t resist, need a Tetris
This is worse than crack

Can’t complete this row, there is a hole
I’ve got no time
No more hope, no joy, there’s too much choice
Won’t make it now

In all the humor, however, are the beautiful, almost haunting voices.

They currently have two albums, their most recent Ctrl + Alt + Duets, and their previously released Songs in The Key of Geek.   The former takes well known songs and morphs them into geeky humor while the latter are original tunes (albeit some are reminiscent of other tunes).

Let’s start with Ctrl + Alt + Duets. This is a very well thought out album; I was especially impressed with how well the words and song concept were matched to the tunes; really spot-on choices all around. TIE after TIE nicely illustrates how well this is done. They take Cyndi Lauper’s Time after Time and adopt it into a Star Wars chase scene; picture TIE fighters chasing the Millennium Falcon:

Asteroids surrounding me, I may be in above my head
3720 to 1, I can’t hear what you’ve said
We weave and dodge, we must evade
Let’s land inside that cave

CHORUS:
You can run, you can hide but they will find you
TIE after TIE
If you falter they’ll blast you, they’ll be waiting
TIE after TIE

From Songs in the Key of Geek, we have That’s What I Want in a Girl,  a song dedicated to the desperate geek that wants any girl that would actually like him. It’s done in the style of a solo song in a musical:

I want her to walk, and to talk and to eat
To sleep and to live and to die (but not now)
To be made out of cells
Made of carbon themselves
To breathe in and breathw out with a sigh

I want her to have eyes, to have fingers and toes
A head and some hair that she combs
When pricked she should bleed
When sick she should sneeze
And she should have two X chromosomes

Their best songs in the album are riffs on something (like Pachelbel Canon in D in My Pachelbel Song) or styled in a genre like the above. My favorite song of the album is Walkthrough. It’s reminiscent of a 90s Max Headroom mashup with a punked-out Peter Gabriel, which is to say, quite original. It also captures essence of text-based adventure games. Errol apparently was so excited about this, it’s in ALL CAPS:

I really liked Songs in the Key of Geek; They definitely have lyrics and singing side down; while the music was good, I see some growth needed on the music writing side.

Clearly, if you’re a bit of geek with a sense of humor, these are your guys. Great sound, clever ideas and good execution. Check them out more fully for yourselves: Debs and Errol.

I’ll leave you with two things. One of my favorite pictures of them which may depict the effect of Debs working with Errol :) 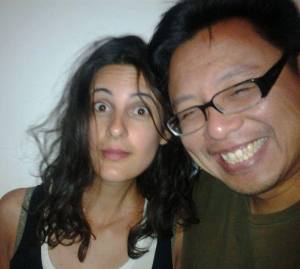 Finally, the perfect song for my writer friends: